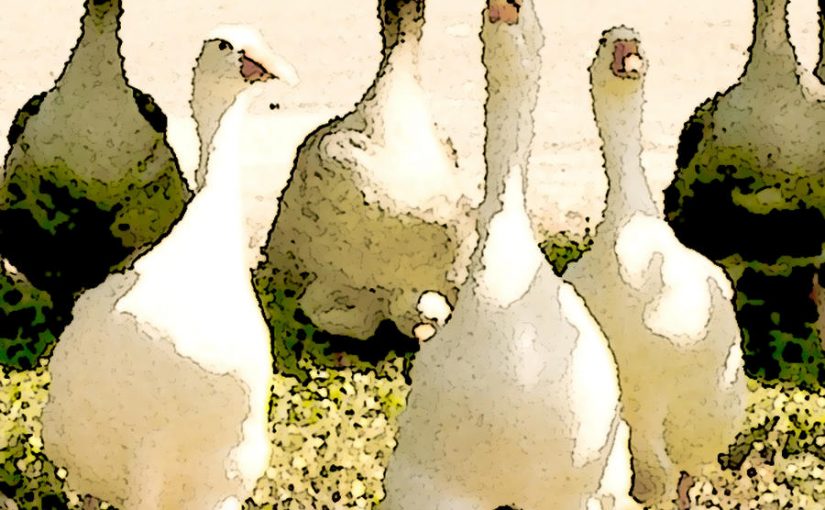 The sixth symbol is Six geese a laying

Going back to Neolithic times, the goose is one of the oldest domesticated birds. It’s also been the topic of a lot of folklore. This is probably the reason it’s part of the song.
Because of their migration habits, they were often considered to be a symbol of the solar year and also fertility. Ancient Egyptians believed that a mummy’s soul rose up in the form of a goose with a human head. The Roman goddess, Juno (rules heaven and marriages), considered the goose sacred.  – In 387 B.C. the geese in her temple cackled and honked, warning the Romans that barbarians were close. Ever since then, the geese were honored for their protective services. Medieval seafarers had a strange tale on the origin of the goose. It seems that on the hull of their ships grew this long, goose-shaped barnacle. Coincidentally, there was also an Artic goose that migrated around England. Since this goose and the barnacle looked a lot alike, the sailors said that the goose originated from the barnacle, and in some tales a seaside tree.
source

Having read the different ideas around the ‘6 geese a laying’, I decided to go with the protective nature of the story of creation. It may sound strange at first but I strongly believe that the story of creation tells the story why we feel so loveless and lost. It is protective because it comforts the seeker by explaining who the world came about and  why we became separated from our God nature. With Adam and Eve ‘turning away’ and choosing ‘knowledge’ over faith, hu-mans became lost. But the story also shows that there is a source – God – where we all are eventually to return.  The story of creation also tells why God created the world. God wishes to experience Itself through the experiences of its spars that are implanted into human forms.

For me, the symbol of birds always convey the message that I am inherently free.

In my opinion the teaching here is to become aware of how we, humans, came about and to learn to accept our bi-nature of divine vs mortal as well as the knowing that were are divine as our birthright.